Scrum Methodology: A Guide to the Most Popular Agile Framework

This article will cover some of the key aspects of Scrum Methodology and offer an overview of what it entails so that you can get started effectively. Know more about this key factor of Agile development. 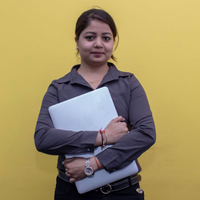 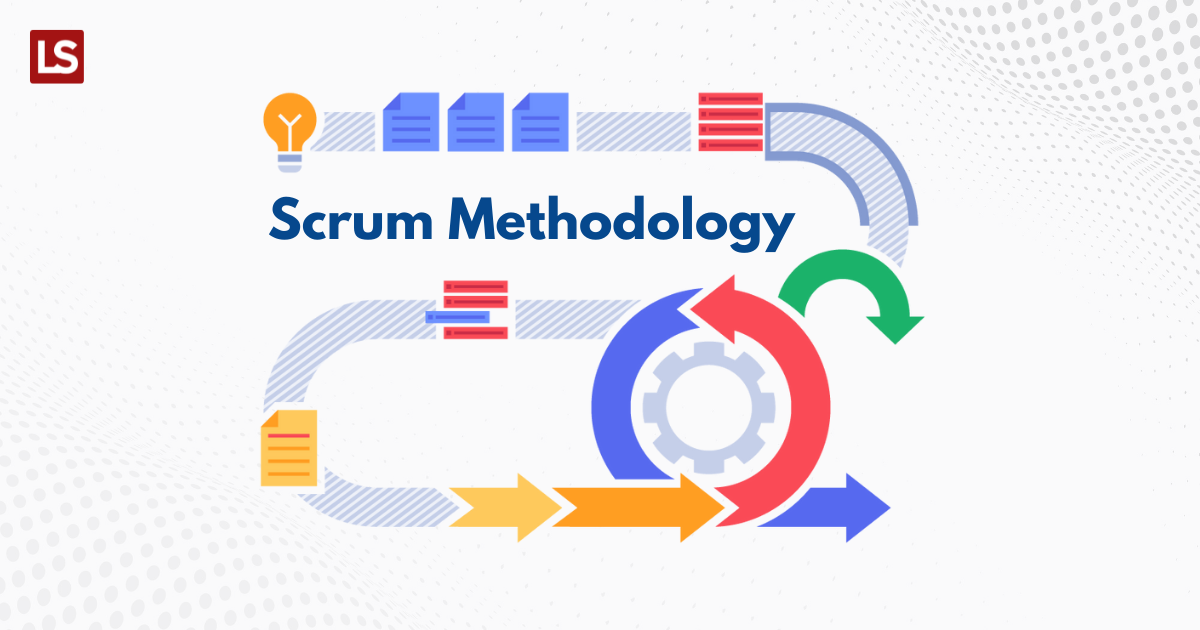 People usually are confused between Agile and Scrum as both of them rely on iterations, frequent feedback, and collaborative discussions so, before getting into the Scrum core let me unravel the difference between the two.

Agile is a methodology that allows a team to manage a project more efficiently by splitting it into several iterations, each one of which enables consistent collaboration with clients to foster steady development and improvements at all the stages. It follows the ideology of delivering incrementally rather all at once.

The key difference between both of them is that Agile is an incremental and iterative approach to project management with a defined set of principles and Scrum is one of the methods used to implement Agile software development.

Scrum is broadly focused on three things: accountability, teamwork, and iterative process to achieve the expected and defined project requirements. It includes the scenarios where requirements of the project are likely to change or mostly not very clear at the initial stage.

Since the defined number of issues have to be catered within each sprint’s time frame, Scrum has great potential to fasten the development process. This Agile process also requires frequent planning and goal setting to help the scrum teams stay focused on the current sprint’s objectives and increase productivity.

Why Scrum? How did it Originate?

“Its principles and lessons can be applied to all kinds of teamwork. This is one of the reasons scrum is so popular. Often thought of as an agile project management framework, scrum describes a set of meetings, tools, and roles that work in concert to help teams structure and manage their work. Much like a rugby team (where it gets its name) training for the big game, scrum encourages teams to learn through experiences, self-organize while working on a problem, and reflect on their wins and losses to continuously improve.” – Atlassian

The term “Scrum” was first used by Hirotaka Takeuchi and Ikujiro Nonaka in a 1986 Harvard Business Review article. They used “Scrum” because the word emphasizes teamwork. This is how Scrum originated in the eighties representing collaboration; however, today it has become a widely used Agile framework used to manage complex and innovative projects.

Scrum is the most popular Agile Framework that includes a strong set of values and practices to deliver quality software in short cycles. It is best applicable in cross-functional teams. As the decision is not taken by a team leader but the team is self organizing and takes decisions as a whole. Everyone is required to develop a task from the idea to implementation.

Basically, the scrum fundamental is founded on empiricism and lean thinking. Being empirical means the knowledge is gained via observation and experience and not only derived for theory or pure logic. Also, lean thinking makes the team manage more efficiently without wasting any effort.

Scrum replaces an algorithmic approach with a heuristic one, which provides people and organizations to deal with certain unpredictability and solve complex problems.

How Scrum is Used In Software Development:

Scrum is among one of the several approaches of Agile methodology that eliminates the major areas where waterfall – the traditional method to software development falls short. For example waterfall relies on the linear sequential phases, where each one of them depends on the results of the previous one.

Here Scrum plays an important role by breaking the deliverables in small sprints. These sprints are not dependent on one another and can even deliver completely new features or functionalities every few weeks while keeping clients’ in the loop. Because teams work in small sprints, they become more accountable and productive to complete the assigned tasks on time.

To understand how Scrum works, you first need to know what are the three pillars that hold it together:

Transparency: This is utmost necessary when working in a team. All the individuals involved should be aware of the progress as well as stakeholder /client, receiving the work. Apparently, low transparency leads to diminished value and more risk. Without transparency, this could waste enormous efforts.

Inspection: Here, this doesn’t mean to get an audit done by some third parties rather an inspection done by everyone on the scrum team. On time inspections allow the team an opportunity to reflect on how the process is working. These inspection points are part of the Daily Scrum meeting and the Sprint Review Meeting.

Adaptation: Whenever throughout the progress, if any moment is identified where it is expected to adapt anything new which is learnt through inspection, the team should look forward to making adjustments as soon as possible to minimize further deviation. 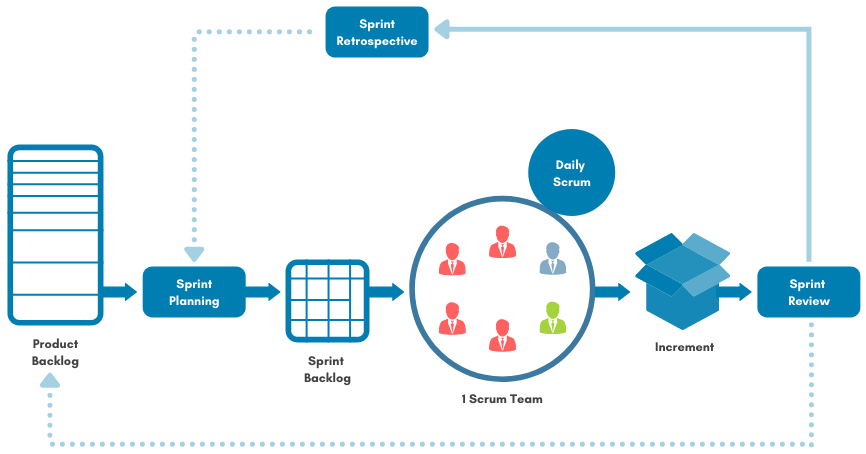 As Scrum teams work in sprints, they get several opportunities to improve the product or process sometimes both in order to deliver quality-driven results. These events are majorly classified in five parts:

This is the initial step that kick-starts the sprint with Product owner, developers, BA discuss which issues to be included in the sprint. Undoubtedly, the power lies to the Product Owner to prioritize the Backlog issues for a potential sprint. However, developers are equally considered to raise, add, push back a few points when needed.

It is with this exercise that the dev team gets to know how many story points – “the metrics to estimate the required effort to implement product backlog items or other tasks” can be delivered in a particular sprint, given their knowledge of resources allocated and any overlooked factor of resources availability.

As an aftermath of sprint planning, the dev gets a sprint goal and a sorted Backlog that is agreed by all and achievable.

Once the sprint is planned, it comes to discuss it on Daily Scrum meetings which commonly takes upto 15 minutes. However, there is no compulsion to include daily scrums but many teams around the world find this an effective way to keep the event short and have a check on each individual’s assigned task.

The Daily Scrum provides an opportunity to the developers to analyse the actual progress towards achieving the goal of the respective sprints and to plan their next tasks accordingly for the day.

Usually this happens on the last day of the sprint which shows the clear picture of the work Done to the stakeholder, team or anyone relevant. This also takes into account the points that were gathered while inspection, for the product betterment. The feedback that can be incorporated in the Backlog for future sprints.

Sprint Retrospection takes place as the final event in the Sprint. Here, the Scrum Team evaluates Sprints to cater future improvements and the best ways to do it. The ethos of Scrum determines that regardless of having the best Scrum Team, there will always be room for opportunity and improvement.

This should be a collaborative effort and every one from the Scrum Team should take part to identify, discuss and plan this.

Including all the processes, work, and other events of thr timeboxed period of the entire development phase, Sprint becomes an event itself.

This contains the groomed issue with user stories that are to be completed within a specific period of time.

The scrum team mostly includes one scrum master along with one product owner and a bunch of developers. There is no such hierarchy in the scrum teams as compared to the other methodologies. Product owner knows what the customer requirements are and the value of it. He liaison between the team and the customer to translate the requirements. There is a clear picture of the business requirements and the desirable features the customer is looking for, in his mind. His availability is vital for the team’s consultation. The most indispensable role he plays is to manage the Product backlog as in to prioritize the tasks. The product owner must have a clear vision, periodical meetings with stakeholders and being able to say “NO” when not feasible.

The major role of Scrum master is to be a coach and keep the ball rolling. His aim is to remove impediments that might halt the teams’ productivity. His role includes facilitating meetings or scrum events, conversations, and improvements. He makes sure that the goals, scope are understood by everyone on the scrum team. Basically, he advocates and reinforces agile principles. What is more, he even helps out product owners to manage product backlog and find effective techniques for them.

The actual action happens here by the dev team where they, being an active member of the scrum team, take part in meetings, understand the value of the requirements and plan their work. Teams of developers plan to accomplish their work at an agreed upon level of quality—the definition of done. Developers work together to meet the sprint goal, checking in with each other as daily inspection and adapt their plan.

How Scrum can Improve your Software Development Process

Organizations and Teams throughout the world are adapting to scrum for a plethora of reasons:

With teams working in small sprints and accomplishing the defined goals at the end of each sprint, all the development processes become way more manageable.

Since every sprint relies on immediate feedback and reviews, it enables teams to improve the overall quality of the final product without stressing over larger goals.

The scrum teams are free to collaborate with one another and come up with their innovative ideas to accomplish the project vision. Providing a highly collaborative environment, Scrum boosts satisfaction among all the team members that leads to higher productivity.

While making every team member adaptable with an incremental process, Scrum fosters flexibility in the software development processes.

It means, if there is any improvement scope, team members are free to change their approaches as per the situation and customer requirements.

One of the main reasons people prefer Scrum is it enables the customers to stay involved in the processes throughout the software development lifecycle, which makes the final product mostly up to the customer requirements and brings higher satisfaction among the customers.

Small sprints enable teams to determine the improvement scopes of the product and fix the potential bugs and errors before they even start to emerge.

What Do You Think?

As Scrum has evolved a lot and emerged as an overwhelmingly preferred Agile method, its popularity seems to be staying there for longer. Do you think the same way? Or you have different views on Scrum Methodology & its Future, let me know in the comment section below.

Shaina is an efficient member of our BA team who is actively involved in product designing and agile product management. Over the years she has gained deep experience in the different project management models majorly Agile methodologies. Leading various different projects across industries for years, she has been remarkable at identifying innovative ways to meet project requirements and enhance growth opportunities for our partners. Being observant she actively participates in all the business development discussions and delivers ideas and viewpoints to senior management for the smooth working of the organization. 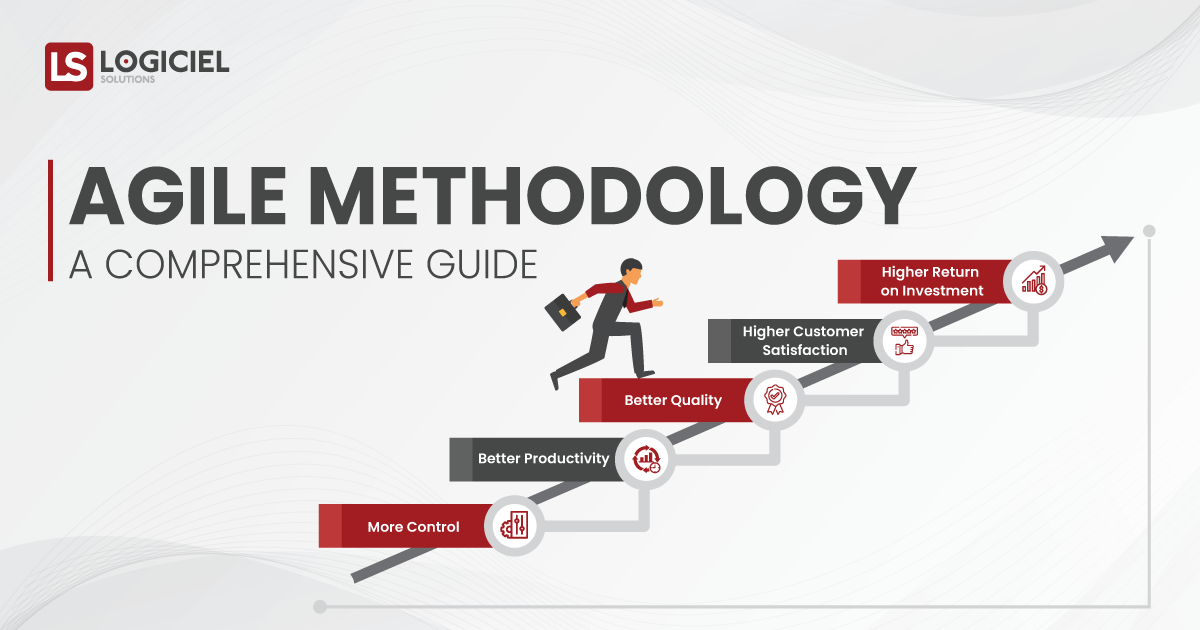 A Comprehensive Guide on Agile Methodology Agile Project Management: Top 6 Best Practices to Get It Right